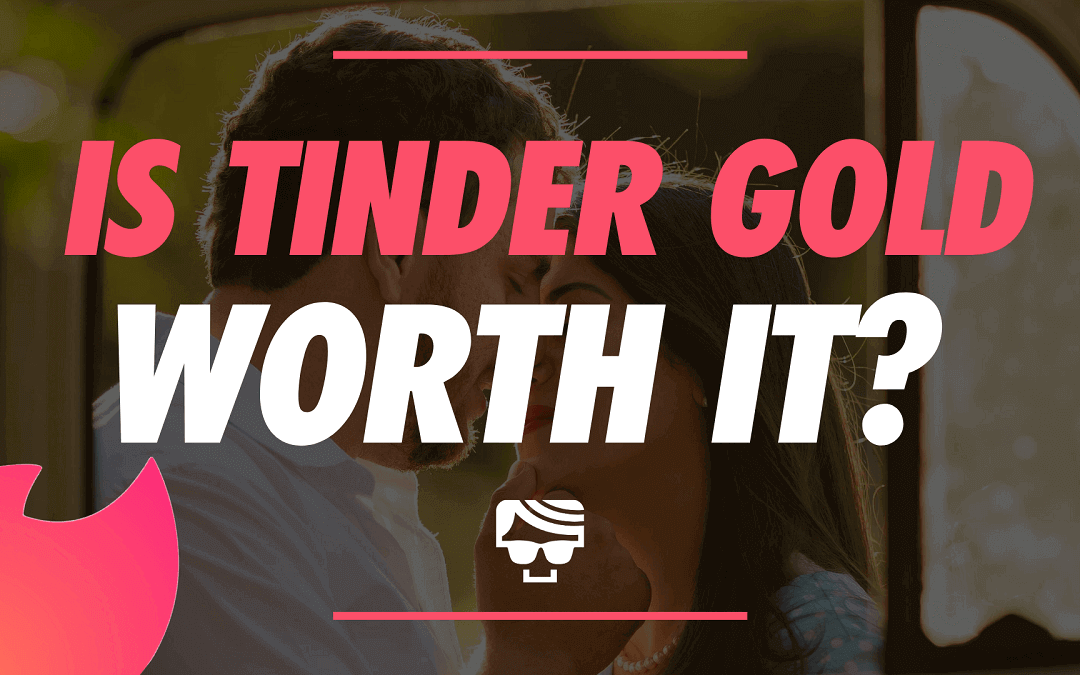 With many free features available on online dating apps, it’s difficult to discern whether or not it’s worth the additional spend for their premium services and extra app capabilities.

What can seem like a waste of hard-earned money or an ingenuine advertising can actually be the key to achieving real online dating success; however, it’s essential to understand their unique benefits and how to use any helpful tips and tricks properly.

In the world of dating apps, Tinder’s subscription services are some of the best available in terms of cost and usability. In addition to their complimentary service, they offer their users three upgraded subscription tiers – Tinder Plus, Tinder Gold and Tinder Platinum (which I made a full comparison of, by the way).

Each subscription provides supplementary tools that help you on your journey to true love or whatever relationship dynamic you’re ultimately looking for. A leg up if you will.

Tinder Gold is the middle service, so the cost sits right in between the cheap and the costly. It boasts a variety of advantages and useful features, which we’ll look in to below.

Swiping and chatting are completely free capabilities that are available right from the get-go, though upgrading to a Tinder Gold membership gives you access to plenty of extra in-app options. So, if you want to spend the extra cash on this subscription and ultimately advance your dating game, here’s some of the exclusive features you’ll benefit from:

With the free version, your daily likes have a set maximum and any hopeful liking spree’s are out the window. Unlimited likes lets you continuously like as many people as you wish. If you’re on a roll and eager to match with the right people, this can be a great tool.

Since constant swiping can also equate to missed opportunities or the issue of swiftness, the rewind ability lets you rewind back as many times as you want. Whereas the free service has a cap on this.

Super likes give you the chance to stand out from the crowd and show someone you’re REALLY interested. With Tinder Gold, you get 5 chances to REALLY, REALLY like people, instead of just one measly shot.

Ever wondered who’s liked you first? Do you want to know who’s interested before you put yourself out there? If you’re the kind of guy who seeks these answers or are a little more reserved than others, this feature is a great asset. 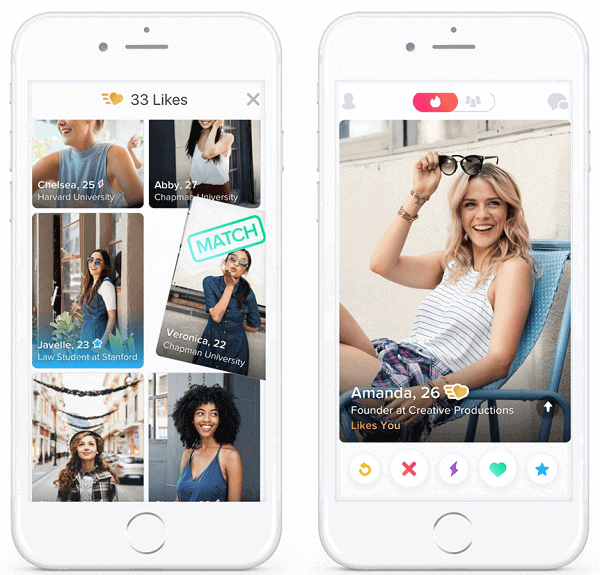 A ‘profile boost’ gives your profile the forefront attention it needs to be seen, so it doesn’t get lost in a sea of competition.

Passport to any location

Tired of matches only showing in your precise location or dull neighborhood? If you’re from a small town, I’m sure you’ve experienced this problem more than others, or even worse, the people you already know (and don’t want to see again) are the only matches you’re being shown. Passport allows users to find matches anywhere on the globe, not just within their distance settings. Bonjour Paris? Ciao Italia? The world is literally your oyster with this one.

We’re all familiar with the annoyance and irrelevance of advertisements popping up everywhere and distracting us from our main screen. With Tinder Gold, you can simply eliminate this nuisance and carry on with your search for Mrs. Right.

Here is where Tinder highlights who they think are your best potential matches (or future lovers), and with Gold, it’s picks are re-shuffled every day and you can like as many as you want to. Also, if you are somewhat of a natural born traveller, you can also use your Passport feature to see your top picks from around the world.

For a full explanation of Tinder and Tinder Gold specific features, and what they mean for you and your success rate, check out my e-book Tinder Hacked. Here you can also learn useful tips to uplift and rejuvenate your entire Tinder experience. 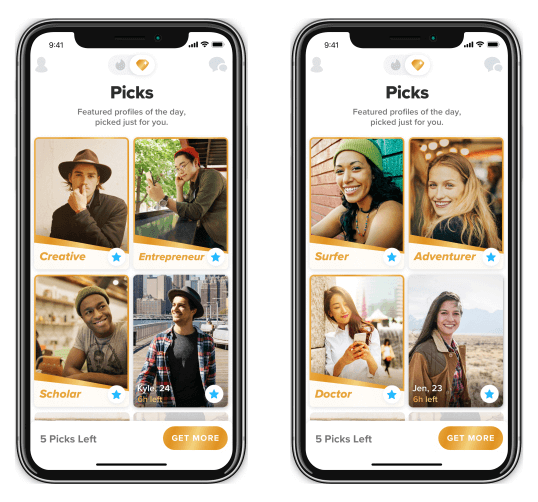 Ok all the above features sound great, but what about the price?

Good news… it’s not completely unreasonable, and even better news, you can cancel after a month, so you’re not necessarily contracted into a never-ending payment cycle. Which is a great option if you’re interested in trialling this.

The exact price differs depending on where you live and your age. Tinder Gold costs are roughly broken down in to three choices, this is where length and cost variance comes in to play.

Make sure to check what the exact pricing is for you and in your region, as the above could vary.

The longer you’re willing to commit to utilising the membership, the cheaper it’ll be per month, a great option for the budget friendly users. Though as mentioned, it could also work as trial on a short-term basis, if that’s what makes more sense to you.

Tinder Gold is the median cost between the three, so it’s handy to learn what sets this membership apart from Plus and Platinum.

Tinder Plus mimics many of the same features as above and is offered at a cheaper price, though with Gold you additionally get these two specific features:

The ability to see who’s liked you
If you’re an anxious swiper or dater, this tool helps you see who’s swiped right on you before you swipe right on them. Safety net perhaps?

Top picks selected by Tinder algorithms
This adds relief to endless swiping, as Tinder chooses the best of the best for you. Sure, they aren’t always right on the mark (it isn’t magic), but they are often the crème de la crème of matches, meaning your dream girl could stand out amongst the rest when using this feature, instead of right under your nose. 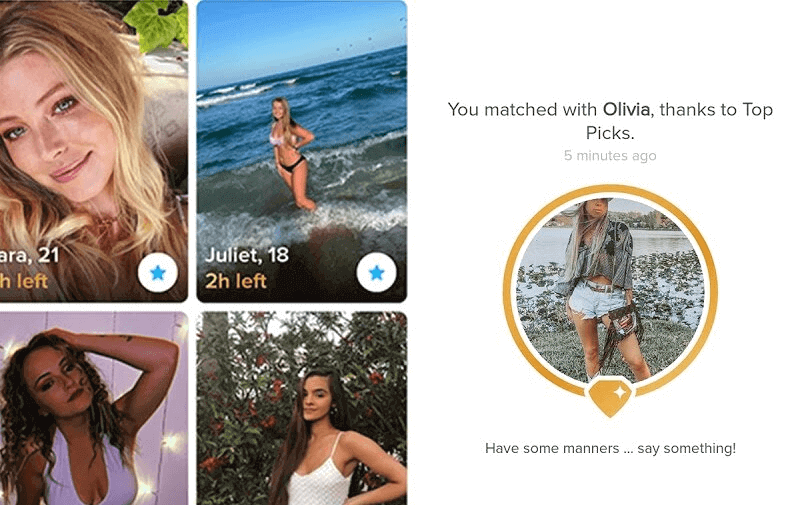 Only with Tinder Gold can you like as many top picks as you wish (with free and Plus accounts, top picks will still show up, but it’ll only let you like one.

Tinder Platinum includes all the above capabilities plus the following two features, though you’re going to pay more.

Priority liking – with this, your profile is seen ahead of any non-subscription users, so you’re guaranteed not to get lost at sea.

Messaging before matching – here you have the ability to start a conversation before you and your hopeful suitor are dually matched.

As you can see, the Tinder tiers vary and have their own advantages, but for Tinder Gold specifically, it seems to fit nicely somewhere in the middle.

For more information on the Tinder subscription tier comparisons, visit this guide from Tinder.com directly.

There is no doubt that the features of Tinder Gold are worth the spend, that is if you’re willing to commit to using the features as offered and get serious about your online dating journey. Tinder rewards it’s paying users, it doesn’t spitefully trick you or promise anything it can’t deliver. The features are there to help, they’re clearly outlined for you and they can certainly make a difference or give a push in the right direction.

With top picks and the ability to see who likes you first, Tinder Gold provides an advantage the average free or Plus user doesn’t have. It’s also only a few dollars extra per month from Plus (depending on where you live) and cheaper than Platinum. Let’s call it ‘a happy medium’ that includes nearly all of the leading industry tools.

In addition to this, if you go through and mostly like people who have already liked you first, you basically trick Tinder’s algorithm to showing you having a 100% match rate. Tinder works off something called an ELO score (which is what the algorithm is), and the higher the score, the more often your profile is shown. So, mathematically Tinder Gold makes sense too.

You can weigh your options up and down and if you’re tight on funds, this can of course affect your decision. But if you’re the type of online dater who’s seen little success or aren’t getting what you hoped to out of it, I suggest you try something different to the age-old routine you’re used to.

According to Business of Apps, around 5.9 million users around the world pay for a Tinder Plus or Tinder Gold account, so you wouldn’t be alone in choosing this route. They also noted that Tinder is used in 190 countries, so fire up that Passport feature and explore the wealth of unique matches from regions far and wide. Who knows? She could be just a quick jaunt across the pond.

Hopefully this article has helped you understand the benefits of upgrading to a Tinder Gold subscription and how it could impact your user experience, profile visibility and give easy access to the glimmering flowers hidden behind a slew of weeds.

A little help along the way is never really a bad thing, so in my opinion, it’s well worth it. 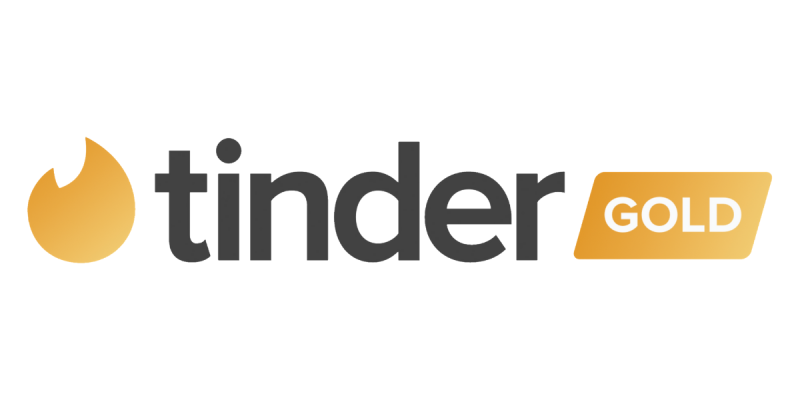