Is Hinge For A Hookup or Relationship?

Hinge is a dating app that claims it is ‘designed to be deleted’. The logic behind Hinge was that Tinder is too superficial, focusing as it does on pictures and quippy bios over in depth personal info.

Millennials and Gen Z daters want more than that, but they don’t want the long personality quizzes and clunky user experience of traditional dating sites. And so, Hinge was born.

The prompts and questions on Hinge are designed for longform answers, meaning that you get to know about your match’s personality as soon as you land on their profile.

You see pictures too, it is a dating site after all, but Hinge is about being interesting as much as it is about being hot. Since the Match Group, owners of both Match.com and Tinder, took Hinge over in late 2019 the site has made some changes and gone from strength to strength.

Although Hinge aims to create a more in-depth and personality led dating experience it’s not exclusively for finding the one. Users on Hinge are looking for anything from casual dating and hookups to serious relationships, though it leans more towards relationships than most apps aimed at users between 18 and 35.

The idea at the heart of Hinge is that you can take time and space to tell matches who you are and what you’re looking for, whether that is a hookup, fun and casual dating or a serious relationship.

Be honest on Hinge, show who you are, and with over 3 million US users you’ll probably find someone who’s looking for something similar. If that sounds exhausting, there are plenty of sites built specifically for finding something more serious. The most trustworthy and successful is probably Eharmony, which you can try for free here.

What Type of a Dating Site is Hinge?

Hinge is a dating app in the model of Tinder (which at this point has become the matriarch of the dating app family–what app isn’t inspired by Tinder?) but with more of an emphasis on showing the personalities and wants of its users and therefore fostering more honest, deeper relationships. It’s supposed to be something of a halfway house between easy-swipe apps and the terrifyingly adult commitment of the desktop dating site. Because even though millennials are in their 30s, they still do not have their shit together, obviously.

Since it was acquired by the Match Group in late 2019, Hinge has had a bit of an upgrade. This may well change the site and its users somewhat, but for now the changes are largely cosmetic and/or to add features.

The color palette on the site has been upgraded to earthy reds and purples that are supposed to evoke the outdoors, and Hinge has a new mascot. There are also new illustrations throughout the app that are designed to look hand-drawn. These cute little creatures are probably making some sort of point about the perfection of imperfection.

Maybe it’s some kind of psychological trickery to try and get us all to settle for the creepy user who keeps finding new ways to tell us he has his very own car, and according to their pictures has worn the same t-shirt every day for several years. Or maybe they’re just cute illustrations of animals.

How Does Hinge Work?

The dating app that’s ‘designed to be deleted’ has always been a little more complicated than Tinder, focusing on a large selection of prompts and questions which users answer to show their personalities. You can like individual answers, and you can send a response with your like, which makes starting conversations that aren’t just your basic ‘What’s up?’ or ‘Nice glasses/car/fish/dress’ again and again.

Hinge prompts are essentially profile questions. If you’re a dating site aficionado they might remind you of some of the open Ok Cupid questions from years ago. They cover a pretty wide variety of topics and come in a few styles, so if you want to show off your wit you might tell potential matches about ‘A shower thought I had recently’ or ‘The weirdest gift I ever received’, while if you’re more serious or really want to get right to thinking about long term compatibility you might invite argument with ‘Let’s debate this topic’ or introspection with ‘I’ll know I’ve found the one when…’. In this way, you can get as deep as you like in your Hinge profile, or stay lounging about in the shallow end.

Hinge uses your activity on the app to predict who you will be into, and then shows you more people like that. This means that the Hinge experience should get better over time. Unless, of course, you live in a small town and get through the profile of every local user in a week. No dating app can help you out of that one – but maybe consider widening your search radius and getting into a podcast with a really long back catalogue that you can listen to while driving…

The algorithm collates your most likely matches, and these become your ‘Most Compatible’ matches. One appears daily at the top of your feed, and you appear at the top of theirs. This was the first additional feature from Hinge, though many more were brought in last year.

Free users of Hinge only get ten likes to use per day, though they can message people with whom they have matched as much as they like. You can pay to be a Hinge Preferred user, and then you can like to your heart’s content.

Hinge introduced a bunch of new features in December 2020, including Standouts and Roses. I’ve written in-depth articles on both recently, which you can check out if you want to keep up to date with the evolution of the app. 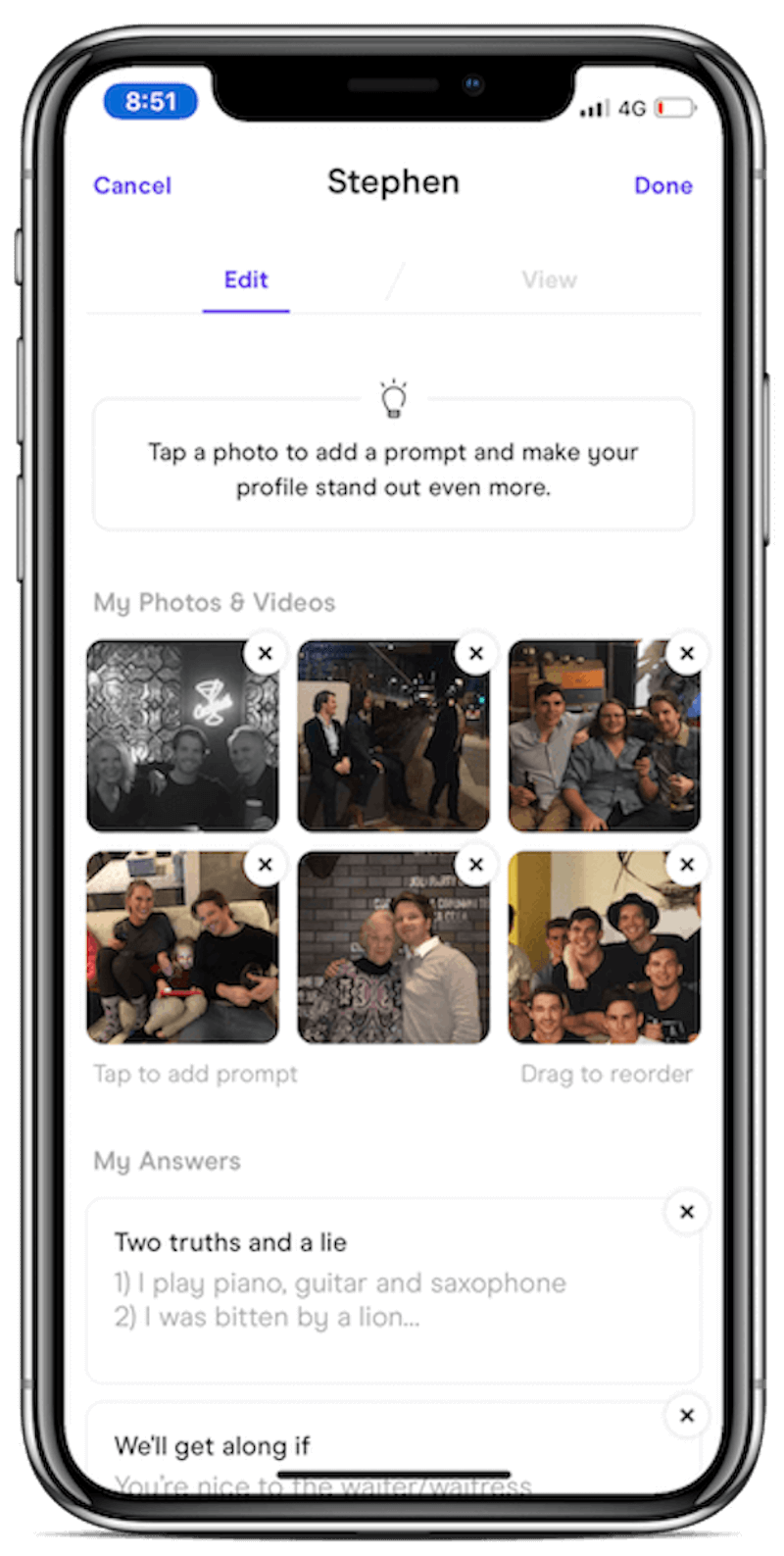 Hinge dropped its swipe features in 2016, so you now navigate the site through your feeds. As you don’t get around through swiping, this allowed Hinge to limit the number of likes a free user gets per day without totally ruining the Hinge experience for those people. As a free Hinge user you get ten likes a day, and these likes can go along with a comment that is essentially an opening message.

As you like individual prompts and photos on Hinge, you can really express yourself in your initial conversation starter. You get ten likes every twenty-four hours on Hinge as long as your profile – in Hinge speak, a profile is a ‘story’ but given the more common use of that term for Insta stories I find actually using it kind of confusing – is completed. A completed profile is one with at least six pictures.

The paid tier of Hinge is Hinge Preferred Members. As a Preferred Member, you not only sound like you’re part of some kind of exclusive club but you also get unlimited likes as well as a few additional features. ‘See Who Likes Me’ is a particularly useful extra feature, allowing you to see everyone who has liked you all at once rather than working through them one at a time.

As a Preferred Member, you also get to set advanced search preferences for potential partners, including if they drink or smoke, as well as their political leanings and whether they have kids.

How Much Does Hinge Preferred Membership Cost?

If you’re committing to Preferred Membership on Hinge for just one month it will set you back $19.99. That drops to $9.99 if you’re signing up for 6 months, but as it’s designed to be deleted maybe you won’t even be on the app that long! Obviously if it’s hookups you’re looking for you’re unlikely to delete Hinge after you’ve had one successful sleepover, so the longer plans may work well for you. Side note: even if you’re looking for a relationship, don’t delete your apps after one date. That’s a very intense move.

Is Hinge Good for Hookups?

Hinge was designed to offer a somewhat more serious dating experience to the young people used to using Tinder and maybe either aging out of endless hookups, or just wanting to try something new. It certainly offers that, and has led to plenty of long term relationships, but in the end it’s an app used by 18-40 year olds. So yeah, Hinge is good for hookups!

The limited number of likes for non-paying users makes Hinge a somewhat more discerning place than Tinder or Bumble. Add to this the fact that you can tell quite a lot about someone’s attitude and sense of humor by not only how they answer prompts and questions but also the questions they pick, and Hinge allows you to make decisions that are going to work for you quicker and with more ease than other apps.

This might mean you can narrow down candidates and find someone who has the same niche interest in making and sailing paper boats as you and wants kids within the next three years just like you do, all before even exchanging a word with them.

Or it might mean that it’s just a little easier to weed out the f**kbois and girls who would do your head in even just as a bedroom friend. Did I just coin that phrase? I’m not sure I like it. But my point stands.

Hinge is great for hookups, though people on the app are looking for all sorts of things. The app is designed to show you what everyone is looking for before you waste too much time and energy on cultivating a rapport with anyone inappropriate, and that makes life easier for everyone.

You get out what you put in when it comes to online dating. Hinge was initially about getting people to put more in – answering longer form questions and curating a profile that really represented them. The dream for its creators really was to create a space for younger people to find serious partners.

But of course, over time it has changed. An app’s an app for that, after all. It’s easy to keep your profile to witty single-sentence answers and focus on banter and flirting on Hinge, just as, if you want to put more in, you can show a lot about who you are and what you want on the app. Hinge works for hookups and for serious dating, but if you want a more specifically focused app there are plenty to choose from. In fact, I’ve recently written a rundown of the best. If Hinge isn’t the app for you, then maybe another will be?

What Is The Best Dating App For YOU?

Don't Waste Time On Any Old Dating App - FREE Quiz Will Show Exactly Which Dating App Is Best For YOU!