Is Hinge Safer Than Tinder?

Of course, we all use dating apps. Most of us use a few of them. But do we know which are safe and which aren’t so safe?

For example, is Hinge safer than Tinder? Let’s take a look at that question!

Hinge is slightly safer than Tinder simply because it’s a less ubiquitous app. Tinder is basically a buzz word in itself, the daddy of all dating apps, and everyone is on it.

And more people generally means more danger, and more potential scams! Additionally, Hinge allows users to link their Insta accounts, so you can at least see a little bit of your match’s life before you meet them.

A good rule of thumb, though? If someone looks too good to be true then they probably are. You’re unlikely to meet, you know, the perfect millionaire with the exact same interests as you on Hinge. Largely because that person doesn’t exist.

Equally, if anyone is asking weird questions or trying to move faster than you’re comfortable with, that’s a red flag. Overall, it’s also probably a good idea to invest in a dating site with a paywall, such as eHarmony or Elite Singles.

Is Hinge safe to use?

With a boom in Hinge users looking for something serious post-Covid-19 pandemic, there’s no doubt that online dating is on the up.

That’s true whether you’re going for a paywalled or a free dating app. Now you know that Hinge is safer than Tinder, you’re probably wondering how safe it is. Is Hinge safe to use?

In my personal opinion, the answer is yes, Hinge is reasonably safe to use.

Follow all the usual rules about online safety and making sure people know where you are when on dates, and you should be fine!

After all, over a million people use Hinge and there are few horror stories. That being said, you can ensure safety more fully on a site with a paywall.

They’re just better encrypted, have more full customer service, and ask for more details from users before they sign up.

This means, largely, it’s too much bother to be a scammer on Zoosk, while it’s easy on Hinge.

Of course, whatever dating app you’re using you still need to be sensible in order to stay safe online.

What kind of dating site is Hinge?

There have been so many generations of dating sites and now dating apps that it makes sense you sometimes look down at your phone and think, ‘What kind of a dating site is Hinge, anyway?’

I mean, remember when it was embarrassing to meet someone from the internet?

Things have changed. Now it’s all about intentional dating online. So, how are you supposed to keep up? Well don’t worry, I’ve got your back.

Hinge is a location based dating app. The first of these apps to hit the mainstream (at least the first aimed mostly at straight daters) was Tinder.

Hinge has been designed to be a bit more serious than Tinder, and in turn it is a little safer but no location based dating app that doesn’t have a paywall is really safe.

You have to be careful on all dating apps, but even more so on apps that are as effortless to sign up to as Hinge, Tinder or Bumble.

What dating app is the safest?

As I’ve mentioned a few times (yeah, I know!), it’s generally safer to sign up for a paywalled dating site. But what dating app is the safest?

Well, there are a few options for safe dating apps. The best are well encrypted and behind a paywall, so that there’s a premium for signing up.

They’re also generally moderated, with a good customer service team who can actually be reached.

Personally, I think eHarmony is the creme de la creme of dating apps, and that extends to safety as well as dating pool and dating outcomes. 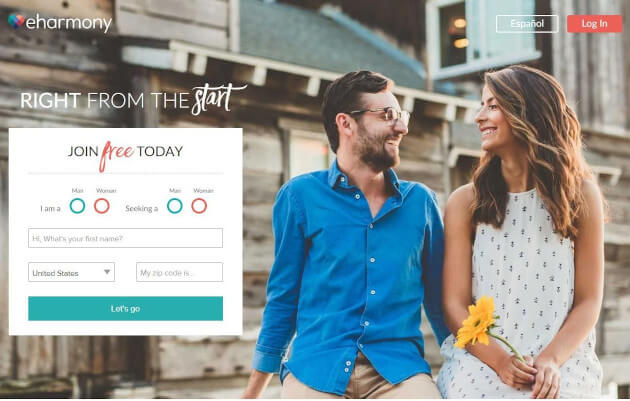 eHarmony is also really excellent for safety, and if you want something more casual than Zoosk is also solid security-wise.

The right paywalled, quality dating app for you will depend on your dating goals, but you can check out my quiz to find the perfect option!

If you want to learn more about eHarmony, check out my full piece on the site here. Otherwise, stay safe online by following common sense online dating advice.

And remembering you’re very unlikely to meet, say, Kylie Jenner on Hinge in St Louis or whatever.

What Is The Best Dating App For YOU?

Don't Waste Time On Any Old Dating App - FREE Quiz Will Show Exactly Which Dating App Is Best For YOU!